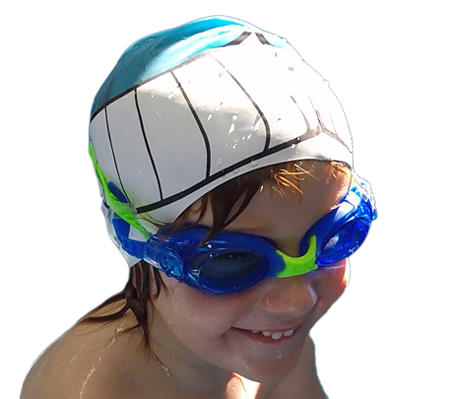 Captain Awesome’s heated, indoor mobile pool sits inside “Rocky, the Rocket Truck” and is designed specifically for teaching preschool children the life skill of swimming. Rocky’s pool is heated to 35°C, ideal for teaching children aged 1 to 6 years. Filters are fitted to the pool and water is checked every two hours to make sure it is of a high and safe standard for everyone in the pool.

The pool is also fitted out with a changing room, fountains and other fun interactive water activities, perfect for a year-round Learn to Swim programme. At the end of each term all children receive a report showing their swimming progress to take home. Alternately, parents can view their child’s progress each week by clicking on our “Your Child’s Progress” button on our Awesome website. 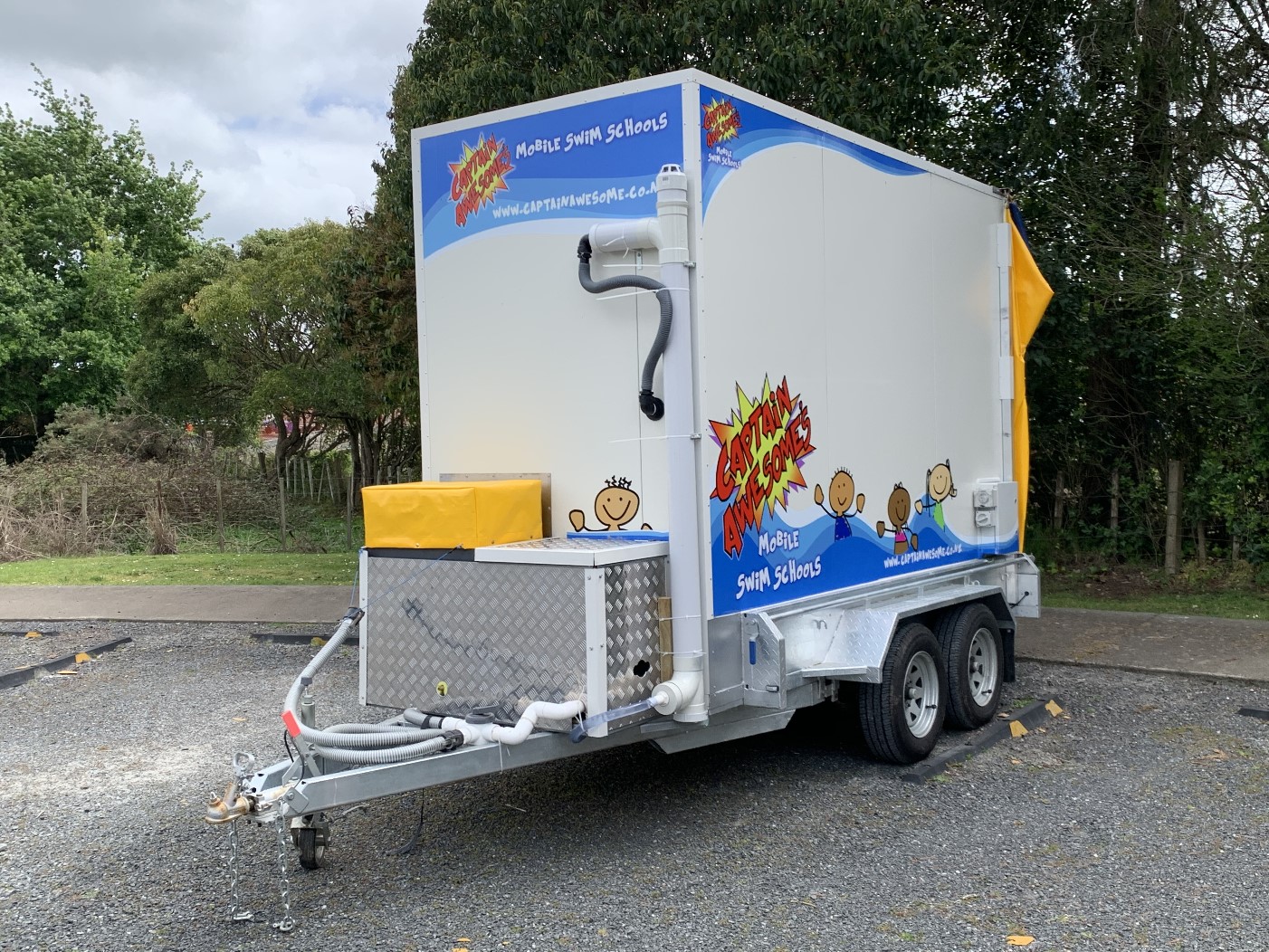 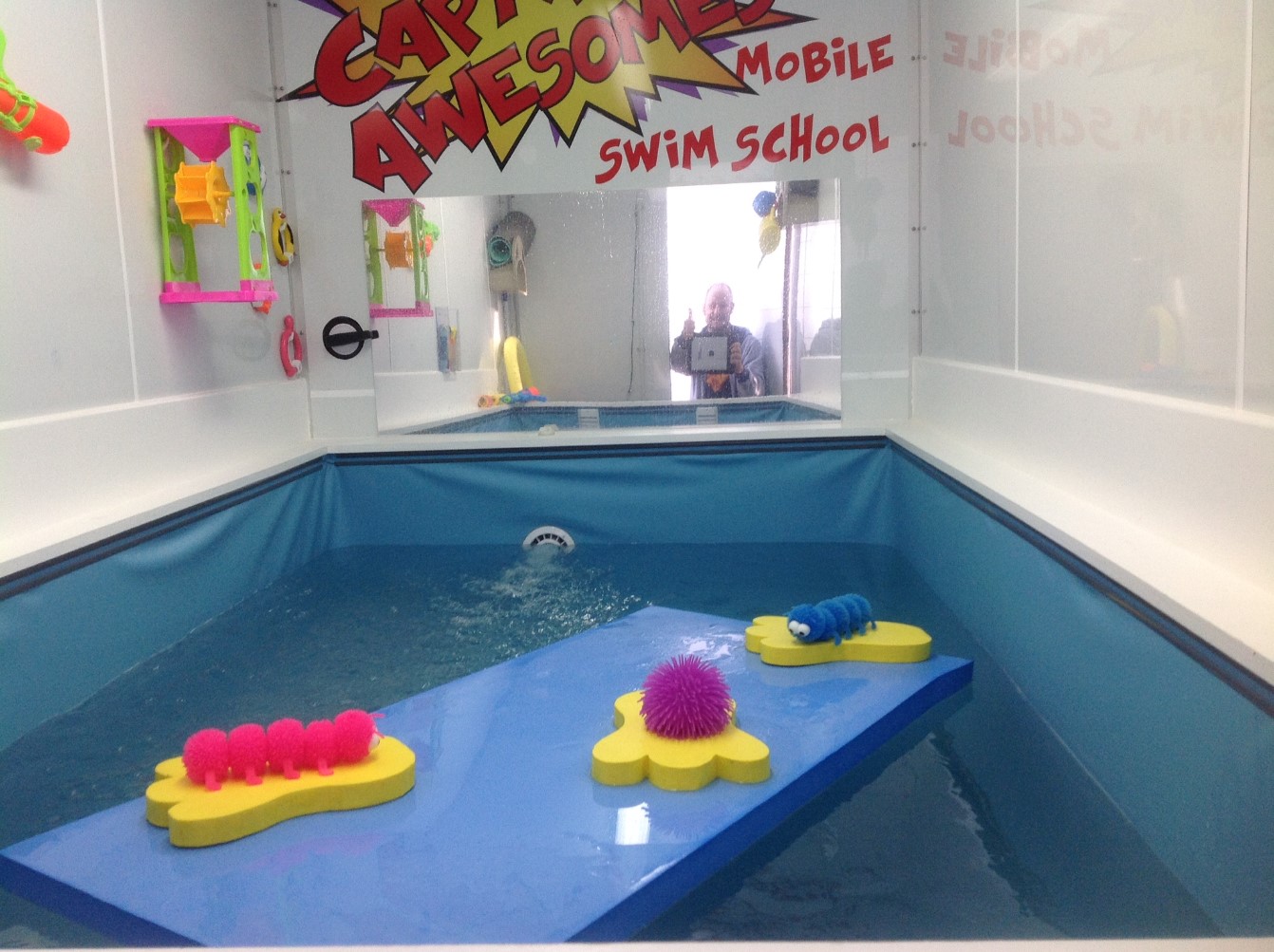 “We were introduced to Captain Awesome and his mobile swim float ‘Rocky’ in term 4 of last year. We were really excited about this and thought it was an awesome service we could provide for our younger children while they attended pre-school. Parents were extremely happy as it meant they did not have to get in the water. Because of the low ratios our children have learnt important swimming skills much quicker than normal.

After just one term with Captain Awesome, all our swimmers have developed and improved their swimming skills! The children at the centre just love their lesson with Captain Awesome and can barely wait for their lessons to begin. One parent mentioned that on seeing Rocky parked up the day before, he would ask his mum ‘non-stop’when it was his turn to swim!

Captain Awesome has so much experience and is happy to deal with the children that are not so confident in the water, too. He even takes several photographs of the children in action and parents are able to view their child’s lessons through a screen that is set up in our office. As the manger of the centres we couldn’t be happier to offer this fantastic concept to the children of our centres and would encourage all centres to do the same.”

Captain Awesome’s Mobile Swim School has been teaching swimming lessons to our pre-schoolers since September 2014. Initially lessons were carried out only with Clevedon Kidz Get Set 4 School, after two years we expanded his program to include Clevedon Kidz.

We have continued our relationship with Captain Awesome’s because of the value they provide to our customers, along with their outstanding service.  Alan Pask, aka Captain Awesome, is a fantastic swim teacher, who engages the students and parents alike.  The students have flourished under his teaching and feedback from the parents is always positive.

The quality service provided by Captain Awesome’s is always professional, yet relaxed and friendly. This means that our parents and students are always happy to see them on lesson days, which only adds value to our business.

I wouldn’t hesitate to recommend Captain Awesome’s Mobile Swim Schools to any preschool, school or anyone else seeking a business to align with.

We at ‘The Gardens Early Childhood Education Ltd’ had always wanted to get our children involved in swimming as New Zealand is known for its beaches and we believe all children should learn to swim.  We investigated ways we could organize this for our children and logistically to get children to the pool was going to be a nightmare.  But then we had a visit from Captain Awesome with an amazing plan to bring the pool to us.

This has been one of the best additions to our education and care program at our daycare.  Not only is Captain Awesome everyone’s favourite person as he knows all about superheroes and princesses but our children absolutely love the opportunity to learn to swim at daycare.

Our parents have been thrilled with the results and all comment about the mass improvement in their children’s confidence around water.  We have been told that children who hated having their hair washed now are fine with having water go over their eyes; that children who were afraid of water are now happy to go in with their parents and we have heard about how their children are so confident floating and blowing bubbles that some of our parents wish they could have lessons too!

In every case our children have gained so much from swimming lessons with Captain Awesome – not only have we seen evidence of growth in water confidence but this confidence has extended to other areas of our children’s lives.  Their sense of well-being and their self-confidence has grown alongside their confidence with swimming.  It has been so great to see and we were quick to let Captain Awesome know that the benefits have extended beyond the swimming pool.

If you haven’t started your child having swimming lessons we totally recommend you start now.

I am only too happy to say that we have used Captain Awesome’s swim service for over 3 years now and it has been truly amazing. Captain Awesome is fantastic with the children and encourages the best from them.  He caters to the individual needs of the child and supports them while becoming confident in the water.  Captain Awesome is a great guy who also has great relations with my staff and is very approachable at all times.

My 6 year old boy is so fascinated by a pool in a trailer that he has forgotten that he hates being taught how to swim. Meanwhile I can watch my other two kids on the school playground. All this without having to make a hike into town. Definitely Awesome.

Our kids absolutely love this swimming lesson style! They actually listen to ‘Captain Awesome’ and have quickly become more confident with floating and getting their faces wet… we’re only on lesson three! They can’t wait for Tuesday ‘swimming day’ to come around each week. Fantastic idea!!!

Fabulous. Our little one was not so keen on swimming, after 2 sessions with Captain Awesome every single day I get “is it swimming today?”.

My two little boys were not water confident but are now able to float on their backs and tummies!! They love their swimming lessons!! Woohoo to Captain Awesome.

My 3 year old twins have gained so much confidence through doing this and it has been a huge help to me not having to go in the water with them both or having to take them on separate days to other swimming classes. Highly recommend.

My child was so scared of the water and didn’t like any water on her face before starting with Captain Awesome. She’s so much more confident in the water now. I love his gentle, non-pushy approach. Can’t wait to start her up again this year…

Captain Awesome has taught both my children to swim. Within a year he changed them from kids who didn’t like putting their heads under, to confident snorklers. He has a great manner that the kids love – he’s consistent, kind, and clear in his instructions. He’s also firm and doesn’t put up with bad behaviour. He never forces the kids to put their heads under or do anything they’re uncomfortable doing. I can’t speak highly enough of him and I would recommend him without reservation.